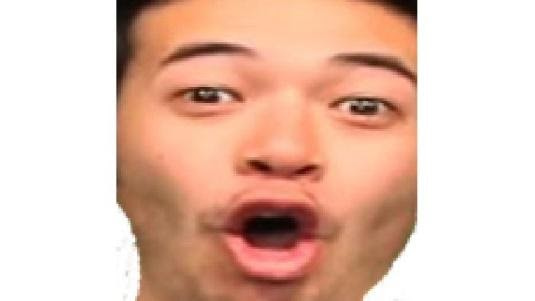 PogU is an emote used by Twitch chat when a streamer does something exciting. It is considered a variation of the popular PogChamp Twitch emote.

PogU is perhaps one of the best emotes on the Twitch.TV platform. This isn’t because of its popularity or its meaning, but just the way it looks conveys exactly what it means.

PogU is an extremely popular variant of the PogChamp emote. If you are unfamiliar with the PogChamp emote or its meaning, then please make sure to check out our article explaining the meaning and origin of Pogchamp.

It features the same personality as the WeirdChamp and PogChamp emotes, the popular streamer and Street Fighter professional player; Ryan Gutierrez, commonly known as Gootecks.

PogU is used in many different situations, whether it is seriously or sarcastically, it is one of the most versatile emotes out there.

So what does PogU mean after all? How did it come to existing and what other trivia is there around it? Let us explain!

What does the PogU emote mean on Twitch?

Just like PogChamp, PogU is an emote that is primarily used to express excitement. This is clearly visible from the wide open mouth and eyes, along with the eyebrows that clearly showcase a sense of excitement.

Pog in Twitch lingo means “Play of the Game”, while the U at the end just conveys a facial expression of smiling very vividly. Combine the two and you get PogU, an emote that you use when you’re super excited to see the best play of a game!

PogU became the famous during the era of super hardcore games known as The Dark Souls games. These were challenging RPG action games which had incredible difficulty levels. So anytime someone would defeat an ultra-difficult boss fight, the chat would spam PogU. It can also be used if chat sees a streamer doing an amazing clutch play or kill.

Moreover, there are a ton of “trolling” ways to use this emote. Oftentimes chat can use this emote when the streamer fails to do what they were intending to do, or if they show something which isn’t very interesting. This is done as a sarcastic thing to troll the streamer.

What is the origin of the PogU Twitch emote?

PogU was originally taken from the same clip that PogChamp was taken from, in fact the PogU emote happens before the PogChamp emote in that same clip. The video that PogU originates from is an outtake from the 2010 Cross Counter TV episode that Ryan ‘Gootecks’ Gutierrez ran with fellow gamer Mike Ross. His reaction was to a cameraperson bumping into their camera tripod, making the entire screen shake.

The emote was added swiftly after the PogChamp emote turned into an actual twitch.tv sensation. PogU’s addition was done in 2018, when the custom emote for Twitch was submitted to FrankerFacez by a user known as Amiccuz. The emote was quickly then adapted right away to the FrankerFacez extension and implemented on to Twitch’s streams.

The emote gained more popularity after Amiccuz promoted it on popular streamer Forsen’s subreddit. This r/forsen post about the promotion of PogU garnered upto 260 up-votes in less than 6 months, with some users demanding that this emote must be made “meta”. And “meta” it did become, as it quickly circulated around Twitch to become one of the more decently used Twitch emotes in recent times.

Now you know what the PogU emote means and how it came to be so popular on Twitch. Make sure to check out more content from us as we keep you up to date on all kinds of Twitch lingo!