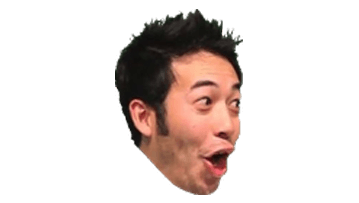 PogChamp is an emote used to convey joy and excitement. It’s featured mostly on Twitch.tv. The emote itself used to show the streamer Ryan “Gootecks” Gutierrez.

PogChamp is one of those emotes which will always be remembered as the beginning of it all.

The PogChamp emote was one of the very first emotes on Twitch.TV. Just like Weirdchamp, it features the face of popular streamer Ryan Gutierrez commonly known as ‘Gootecks’. If you don’t know of Weirdchamp or Ryan Gutierrez, feel free to check out our explanation of the Weirdchamp emote.

PogChamp is one of the few super popular emotes that got removed recently, and by recently we mean the 6th of January 2021. Twitch had decided to remove the popular emote after Gootecks’ comments on the mob of Trump supporters that recently had stormed the United States Capitol building during the certification process of elected President Joe Biden.

So what is the PogChamp emote? What does it mean and how did it originate? Let us explain!

What does the PogChamp emote mean on Twitch?

PogChamp is very easy to explain, unlike many other Twitch emotes. It features Ryan Gutierrez, aka “Gootecks”, with an excited or cheerful expression.

Hence, PogChamp is used to express excitement by the chat if they see something exciting happening. However this is not the only use of this emote, as it can also be used sarcastically when the streamer is failing at something or is showing something unimpressive as a means of trolling.

PogChamp’s full abbreviation is “Play of the Game Champion”, which explains this emote completely. This emote is spammed in chats when a player does a really cool kill or clutch play or just wins a game. It’s also used sarcastically to troll the players when they do fail to do something they were trying to, which is always funny to see.

What is the origin of the PogChamp Twitch emote?

The PogChamp emote has been around for a while, to be precise; 2010. The still in the emote was taken from Gootecks’ appearance on his YouTube series with fellow gamer Mike Ross known as Counter Cross TV.

The still was taken from an outtake that was released in November of 2010, which saw Gootecks reacting (in the PogChamp face) to a cameraperson bumping into a tripod. PogChamp the name comes from a video by Gootecks and Mike Ross titled “Pog Championship” as a commercial for a joystick for the brand Mad Catz in 2011. In said video, they play Pog a popular game from the 90s where you flip disks.

In 2012, Twitch.TV added Gootecks’ reaction as one of its global emotes under the name PogChamp. Gutierrez’s popularity soared with the release of this emote, sending him to a whole different league in terms of streaming. He capitalized on the PogChamp name by creating merchandise with the PogChamp emote on them in the art style of Andy Warhol.

Since its release in 2012; PogChamp has gone from being an expression of surprise by Gootecks to becoming one of the most used emotes on Twitch.TV.

Now that you know what the PogChamp emote means and how it came to be so popular on Twitch. Make sure to check out more content from us as we keep you up to date on all kinds of Twitch lingo!