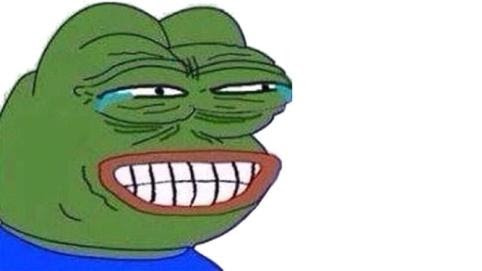 PepeLaugth is a Twtich emote used to express laughter when something funny is happening on stream. The emote features the face of Pepe the frog with a big grin and watery eyes.

What more could be said about Pepe the Frog than the hundreds of internet articles about him haven’t already explained. He is a character that is super relatable because of his entire personality revolving around expressions. Whether it’s sad, happy, excited or scared; Pepe the Frog is always a relatable character in any given situation.

With the green humanoid frog’s widespread internet fame, came a plethora of internet memes about him. As soon as the people on Twitch got their hands on him, they created him a staple in the 2010s meme culture.

Emotes on Twitch with Pepe as the protagonist have taken over by storm and we’re here to explain what the different vague or easy to understand emotes mean!

So what is PepeLaugh? How did it come to exist on Twitch and what does it mean? Let us explain.

PepeLaugh is a confusing emote; with Pepe’s mouth looking like a mix between smiling and cringing and his eyes seeming sad rather than a “Laugh” reaction.

The easiest way to explain this emote is to compared it with the “crying laughing emoji”, where the emoji is laughing so intensely that tears start to pour of its eyes. Same is with the PepeLaugh, it means an INTENSE laughter, so intense that your eyes get watery. Its main use is as a reaction to funny things that are happening on the stream that you’re watching.

Viewers use this emote to express an uncontrollably intense laughter, it can be used instead of emotes such as OMEGALUL and KEKW (If you’re unfamiliar with these emotes, be sure to check out our explanations of both).

The PepeLaugh emote is often used alongside the phrase “Here it comes”. This is in situations where the chat can sense that something funny is about to happen. Hence they say it as “Here it comes *PepeLaugh*. This emote is perfect for virtually any humorous situation on a stream. While most people use LUL, if something is excessively funny, we recommend that you use PepeLaugh and express yourself clearer!

The PepeLaugh emote has been on Twitch for a long time. While it is not as long as some of the other emotes on the platform, some being added way back in 2013. PepeLaugh has certainly stood the test of time on a platform such as Twitch, where new emotes are created every day.

The emote was found on a 4Chan thread in 2014, in the same vein as most of the other Pepe the Frog content. PepeLaugh was then uploaded to Franker Facez, a popular Twitch plugin which provides you with emotes and better customization options to make you a better part of Twitch chat. After being added, a famous Twitch streamer by the name of Forsen helped popularize the emote because of his love for Pepe as a character; the rest is history.

Now you know what the PepeLaugh emote means and how it came to be so popular on Twitch. Make sure to check out more content from us as we keep you up to date on all kinds of Twitch lingo!