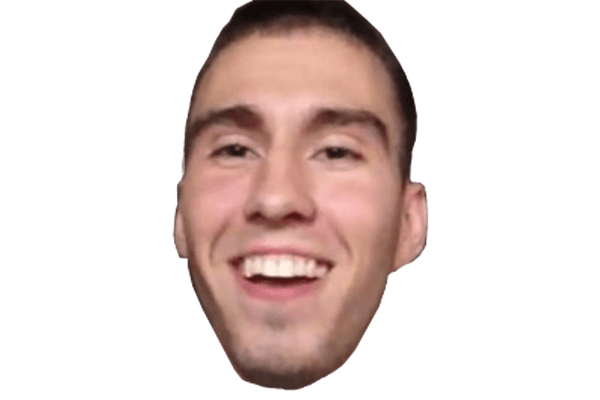 4Head is an emote used to convey laughter in response to a funny situation during a stream. The emote features the smiling face of “Cadburry”, a past League of Legends streamer.

The 4Head emote is one of the most popular Twitch emotes to date, despite being one of the more older emotes.

This is the original emote, after which the acclaimed emote “5Head” was created. If you’re unaware of 5Head, please make sure to check out our breakdown of the 5Head emote, where we explain to you the meaning and origin of 5Head.

4Head features the face of known internet personality Cadberry, who was a popular streamer for an online real-time strategy and battle arena game known as League of Legends. However, his days of streaming are behind him and now he does the peculiar job of uploading the same picture of his dog once every week on his Instagram.

The 4Head emote started to circulate around Twitch in 2015, which was almost a year after he stopped streaming regularly.

So what does the 4Head emote mean? How did it come to be? Let us explain and give you some extra facts about it!

What does 4Head mean on Twitch?

The 4Head emote has undergone a serious evolution since its release on Twitch in 2015. It started out as the primary emote to express laughter (at least until KEKW came to be). This was used in chats as a response to something funny that happens on stream or whenever a streamer makes a joke. It was a happy and fun way of chat to express their laughter without having to go overboard by spamming “HAHA” in full caps.

However, thanks to multiple streamers such as TimTheTatMan and their chats, 4Head has a completely different meaning now. 4Head in the current climate means that something foolish or doomed to fail is about to happen. Chat usually spams 4Head when streamers are about to make a poor in game decision. So the next time you hear the words “4Head” being said by any streamer you’re watching. Just sit back, relax and prepare to see some poor life choices being made right there on screen.

What is the origin of 4Head?

The original image that is featured as the 4Head emote was taken by Cadberry himself, and somehow turned into this emote by his fan base.

4Head is one of the VERY few emotes which do not have an exact date of creation, this is very rare with Twitch’s database. However, there are different traces of 4Head circulating around the internet at different time periods.  2015 is the only clear beginning of the emote that can be found on the internet.

Afterwards, Urban dictionary put out a definition of the 4Head image. They stated it as “Twitch emote. Represents a guy laughing, the emote is usually being spammed in twitch chat when there’s someone laughing hysterically.”

This emote was submitted to Franker Facez in September of 2016.

Now you know what the 4HEAD emote means and how it came to be so popular on Twitch. Make sure to check out more content from us as we keep you up to date on all kinds of Twitch lingo!