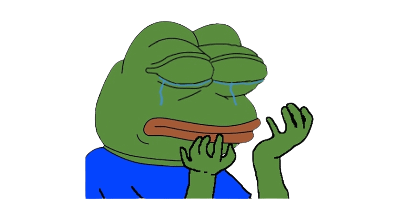 Pepehands is an emote used to convey sadness. This sadness can be from the individual chatter, the chat as a whole, or even on behalf of the streamer.

In the internet age, jokes, images, and memes come and go in a flash, and keeping up with them means what can be hard.

Among these strange inside jokes and trends is Twitch emotes, an emoji-like system which allows users of the live streaming site Twitch.tv to interact with one another in chat rooms while they watch their favorite streamers play video games, do activities, or just chat!

One of these emotes is called Pepehands, a sub emote in a category of emotes revolving around the popular Pepe the frog meme.

These memes and emotes are often used as a shorthand way of expressing an emotion or feeling such as happiness, sadness, anxiety, fatigue, or any other amount of feelings a Twitch streamer can convey or a Twitch chat can express through the spam of these images.

Pepehands itself is an image of a cartoon frog, known as Pepe the Frog, with his hands held up near his eyes. His eyes are shut and tears are welling down his face, and he has a distraught or sad look on his face.

If you’ve seen this image, or simply have seen the word Pepehands somewhere on the internet before and you are unsure of its meaning, read on!

Pepehands is an emote used to convey sadness. This sadness can be from the individual chatter, the chat as a whole, or even on behalf of the streamer. It is often given as a response to the sadness of a streamer in a wide range of situations, ranging from losing a video game to some actual real-life issue being expressed sincerely to the chat.

Chatters can also use pepehands to convey sadness in a lighthearted and comedic or sarcastic context. This can include when something bad but funny happens in a video game or other story, or the streamer tells a funny story with sad elements.

Pepehands can also be used in a more serious context. With a medium like Twitch chat, a fast scrolling feed of communication, you can often not read every message. This means the chat has to communicate each emotion as a full group rather than individually.

If chatters want to express support or condolences in a tough time for a fellow community member or for the streamer themself, they can put the pepehands emote into the chat to express their shared sense of sadness.

The use of emotes extends beyond Twitch as well, being used all over the internet. If you see the image of the crying frog, or the words :pepehands: surrounded by colons like such, you should know it is in reference to this popular Twitch.tv emote.

It can often be seen in the comments section of a Reddit post or in a thread on Twitter, so if you see Pepehands written in one of these contexts, know that it means the same thing.

Pepehands origin is hard to pin down, and its first widely known use is after its upload to the FrankerFaceZ Twitch extension, a service that allows streamers and Twitch users alike to access emote images to be used in stream chats.

It was then uploaded to Reddit, specifically in a post on the subreddit forum of popular internet figure, gamer, and streamer Forsen, who was and is well known for playing strategy type video games such as Starcraft II and Hearthstone.  From here, Forsen’s community and the internet at large had access to Pepehands.

With many other Pepe the Frog memes, images, and emotes already widely available all over the internet, it wouldn’t take long for Pepehands to become the next emote to gain massive popularity for describing an emotional state in a succinct and often comical way.

Pepehands originally began to grow in popularity around 3 years ago, sometime in 2017. It was mostly spammed in Twitch chat by the community of Forsen.

Forsen’s community, particularly his Twitch chat and subreddit, are notorious for inventing, spreading, and making viral a ton of different emotes and memes, with Pepehands and other Pepe the Frog meme offshoots being popularized in Forsen’s online communities.

The emote, along with the actual words “Pepe hands,” sometimes expressed as “:pepehands:,” began to grow rapidly in popularity among users on Twitch and Reddit, being used all over the internet to express sadness in both a comedic or ironic sense, as well as in certain situations in a more serious context.

The reason for this is that many different Twitch users, in fact, most people who use the site, are not only denizens of one streamer’s community. Most streamers use the platform to engage with multiple streamers and their communities.

So, now you know what Pepehands means. Along with all other Pepe the frog emotes, such as MonkaS, Poggers, and Feelsbadman,  Pepehands is a Twitch emote used to convey emotion in the chats of Twitch streamers, which spread all over the rest of the internet as a shorthand for emotional responses to different stories and situations.

Pepehands, in particular, is used to express sadness, and, like all things on the internet, can be used as a joke or meme, or as a serious response to some new information.

Take the general tone of the community you’re engaging with and the context of the particular post, stream, or situation into account when you’re trying to figure out exactly what people are trying to convey when they say or post Pepehands.