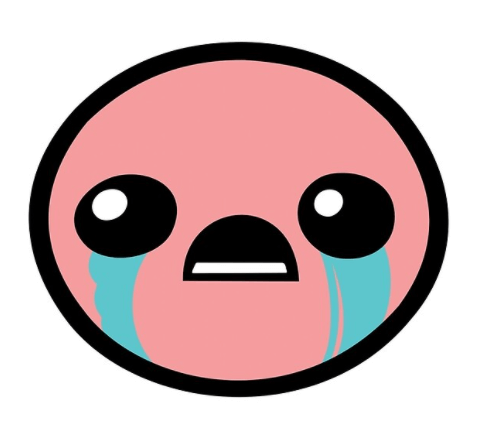 BibleThump is an emote used to convey sadness on the Twitch platform. It features the face of the character “Isaac” from the popular game “The binding of Isaac”.

Have you ever seen something on a Twitch stream that genuinely makes you want to cry?

Well, there is a plethora of different content there. Whether it’s ‘just chat’ streamers telling emotional stories; or just a play through of The Last of Us Part 2, some things are bound to make us emotional.

The BibleThump emote is sure to be the right emote for your needs to express these emotions. This emote is a pink face with large eyes and a sad expression along with tears dripping down those big beady eyes.

Today we talk about the true meanings of the BibleThump emote, explaining the origins and mentioning some facts regarding it!

What does the BibleThump emote mean on Twitch?

Unlike a lot of other Twitch emotes, BibleThump’s meaning is not very cryptic. Instead you get a clear cut meaning of the emote as soon as you look at it. Simply put, BibleThump means sadness. This emote is used to express an overwhelming amount of remorse and sadness. This emote is originally taken from the protagonist of a modern cult classic video game known as The Binding of Isaac.

However, it is hardly that simple as Twitch chat uses almost every emote in many different ways. Just like all the other emotes, BibleThump can serve multiple purposes. First of which is obviously to express sadness, secondly it is used to troll streamers that rage when they lose in video games. It is also used in an ironic sense, where chat would pretend to express sadness even though there isn’t any reason for it. While people think BibleThump has lost a lot of its popularity after other crying emotes have been releasing recently it’s still strong in numbers. It remains on the Twitch Emotes statistics as one of the most used emotes of all time on the list of thousands.

What is the origin of the BibleThump Twitch emote?

BibleThump was originally acquired from the 2011 video game “The Binding of Isaac”. An arcadey indie rogue-like where you play as Isaac, a disturbed child hiding in the basement of his house from his evangelical mother. The game was released for Microsoft windows in 2011 and was created by Edmund McMillen and Florian Himsl.

The name BibleThump is given to it as the story of the game revolves around Isaac’s fear of his mother. He fears her because she is overly religious and forces the Christian religion on him. Not to mention “biblethumper” is a negative term for aggressive preachers of Christianity; hence “BibleThump.”

BibleThump was added to the Twitch library in 2012. However the emote did not gain much traction as The Binding of Isaac was a minor game even then. In early 2013, icryeverytime.com launched and it featured a flash animation of BibleThump with sad music playing in the background which brought massive popularity its way.

Now you know what the BibleThump emote means and how it came to be so popular on Twitch. Make sure to check out more content from us as we keep you up to date on all kinds of Twitch lingo!